It’s a good thing that Anna is bridging to Juniors in August, because her Brownie vest is almost full! Together with the other brownies in her troop, Anna completed the World of Girls Journey in April. And in doing so, she also earned the Journey Summit Award for completing all three journeys.

We organized a condensed version of the World of Girls Journey, completing a badge each week, and finishing the whole journey in a month.

Week One: Hear a Story. We assigned a single story in the World of Girls book to each girl the week before, and they told the stories to their fellow Brownies during our first World of Girls Journey meeting. Then we “flew” around the room, traveling to where each story took place (Jordan, Thailand, and Nunavut, Canada) and talked about the ways people in each country shared stories. We created a story of our own using “Tell Me a Story” cards, and we finished with an “All About Me Limbo,” where each girl said something unique about herself while walking under a foam pool noodle.

Week Two: Change a Story (Part One). We talked about the stories from Week One, this time focusing on how each story could be changed. We then talked about stories in our own community and ways in which we could change them. Together, we decided to take some of the money we raised through cookie sales, and give it back to the community by going to a nearby St. Vincent de Paul and buying children’s books for kids staying at a local domestic abuse shelter.

Week Three: Change a Story (Part Two) and Tell a Story (Part One). We met at St. Vincent’s and spent about a half hour shopping for books. Each girl picked out five picture books and five chapter books at $0.50 each ($5 per girl charged to the troop account). Then each girl selected one of the books she chose, and agreed to write a short paragraph about why she selected it.

Week Four: Tell a Story (Part Two) and World of Girls. The girls each completed the “Tell a Story” step by recording their paragraph on their favorite book on video. Then we got out white poster sheets and colored pencils, and each girl made a bright and happy picture to cheer up the families living at the shelter. This last activity brought the journey to a close.

Two weeks later, we held our Cookie Celebration and handed out all the awards that the girls earned during Cookie Season. First, we called up all the Brownies and awarded them the two Cookie Business badges and the two Financial Literacy badges. As you can see, she went from two full rows of badges to almost three in one night! 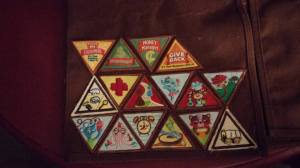 Then after the Juniors received their badges, each girl came up individually and received her patches and prizes based on the number of cookies sold. Everyone who sold cookies earned at least one patch, a certificate, and a prize. Anna, as top seller, got the most awards, the most prizes (tied with the top selling Junior), and a special certificate.

Check out all the patches!

Ten fun patches total, just from cookie season, and as I said before her vest is almost full.

Just a little space left in the corner.

For being in Brownies only a year, and talking half that time to find a stable troop, she’s done a fantastic job. We’re so proud of her.

Little Did She Know...

The Single Mom's Guide to Surviving the Zombie Apocalypse

That one day, we will all hold hands and D A N C E in heaven, like birds on trees, being moved by the warm magnolia breeze, like purple annuals and yellow perennials growing in the same garden of love.