Our Lady of Mount Carmel (Photo: The Aquero Foundation)

I went to Mass at the Carmel of Maria Regina yesterday for the first time since September. And as I knelt in the chapel under the statue of Our Lady, I thought about a recent controversy in which a popular Protestant pastor, theologian, and writer named John Piper claimed that Christianity has “a masculine feel.” I wondered what the nuns in the cloister kneeling in prayer with me at that very moment—together with Our Lady and numerous female Carmelite saints—would think of Piper’s claim.

The words of Holy Scripture and the witness of innumerable saints are so much bigger than Piper’s “Masculine Christianity.”

END_OF_DOCUMENT_TOKEN_TO_BE_REPLACED 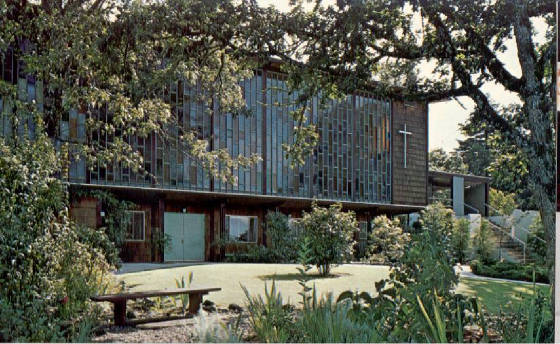 The Chapel of the Carmel of Maria Regina. (Photo: The Aquero Foundation)

I knew I had to go to church yesterday, but the question was “where?” I like my new home parish—particularly the music ministry, which I plan to get involved in once I’ve had a full year to settle in. My only complaint is the director’s fondness for patriotic music on national holidays. I don’t like patriotic music in church. I think it blurs the line between the kingdom of the world and the Kingdom of God—but I can put up with a little now and then in return for the beautiful music programmed the rest of the year. Yesterday was different, though. I knew I could’t handle hearing America the Beautiful (the usual closing hymn on holidays) much less The Star Spangled Banner (the usual organ postlude). So instead I attended Mass at the Carmelite Chapel just outside of town.

The Carmel celebrates Mass most Sundays at 7:30 AM. The nuns sit apart from the rest of the congregation, but can see the altar—which is turned at a 45 degree angle in order to be visible from both outside and inside the cloister. The sisters usually sing a couple of hymns plus the psalm and propers, but yesterday there was no music. I prefer sung masses in general (when the music is good anyway) but in this case the absence of music provided more room for silence—an appropriate choice for the day.

The readings were taken from the Lectionary, but, due to a fortuitous alignment of the church and secular calendars, were also appropriate for the day:

The priest’s homily focused on forgiveness, and he did an excellent job tying the readings to the anniversary. He talked about how forgiveness doesn’t preclude justice (stepping beyond the readings to use the words of the “repentant thief” in Luke as an illustration) and then contrasted forgiveness, which is unilateral, with reconciliation, which is relational. He then talked about how forgiveness opens up the possibility of reconciliation and how God wants us to be reconciled to him and each other through Christ. It was short, to the point, and sensitive to the occasion.

Prayers were then offered on behalf of the victims of 9/11, for those who have died in the Iraq and Afghan wars, and for peace in the world. The perfect choice of petitions for the day.

The combination of the peaceful setting, the quiet liturgy, the readings, homily, and prayers conveyed a sublime sense of God’s grace that reached its fullness in the Eucharistic Prayer. We said the Our Father together—asking to be forgiven as we forgive others—and as I stood and walked up front to receive, I felt both forgiven by and reconciled with God.

I spent the rest of the day with my family, and I told my wife and daughter I loved them every chance I got. It was the best way to spend this difficult anniversary that I could have imagined.

Crossposted at The Pangea Blog.