Sports are supposed to be fun. This isn’t fun anymore.

It’s not just the Redskins. It’s the NFL as a whole. A greedy handful of billionaires pay a slightly larger handful of multi-millionaires and a whole lot of cannon fodder to crash into each other on TV. They only started caring about concussions, or domestic abuse, or a supposedly offensive name when it threatened their bottom line.

I put up with it far longer than I should of. I tried to recapture the innocent fandom of my youth—given one last gasp in 2012—but I was fooling myself. That NFL had its own problems, but I didn’t know then. This NFL has even bigger problems now and I can’t turn a blind eye anymore.

I also can’t twist myself in knots over a team I have no control over.

Dan Synder, who bought the Redskins in 1999, is a “bad” owner. He has taken the great NFL franchise of the first quarter-century of my life and turned it into a laughing stock. 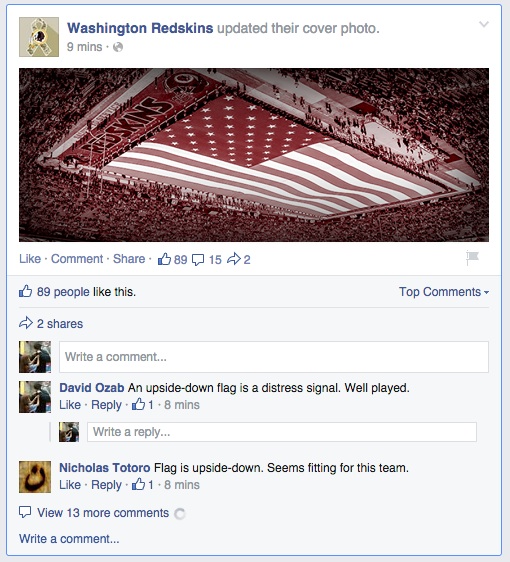 The above image captures this franchise’s ineptitude. The original shot was taken from a seat above the canton of the flag, making the flag look upside-down in the image. This updated cover photo was posted right after the game. I was the first—but not the only one—to note that an upside-down flag is a universally recognized distress signal. I knew it was unintended, but I thought it was funny anyway. What did the page moderator do in response? Apologize? Have a good laugh? Nope. This supposedly professional representative of a decidedly amateur operation flipped the image.

Now the flag is right-side up, but the crowd is upside down. Too quote a popular meme among fans, “that is so Redskins.” Then the post and the image were both deleted. Fixing a mistake by pretending it didn’t happen? Again, “so Redskins.”

This day has been a long time coming. I’ve been through all the stages of grief with this team since 1999, and I’ve finally reached the last one—acceptance. This is not an ongoing two-decade-plus exception to a rule. This is the new normal. The Redskins of my youth were a great team. The Redskins of today suck. They’ve sucked for years and with rare exceptions will suck for the foreseeable future.

So instead of stressing out over the latest in a long line of embarrassing losses, and trying to either justify the last bad decision, or suggest something other than the inevitable next bad decision, I will stop.

I am done writing, posting, tweeting, and worrying about my favorite NFL team. And already I feel so much better.

I’m not switching my allegiance or jumping on a bandwagon. Instead I’m just walking away from the NFL altogether.

There are so many better things I can do on Sunday. So this is one last “hail” to all the memories, and goodbye.