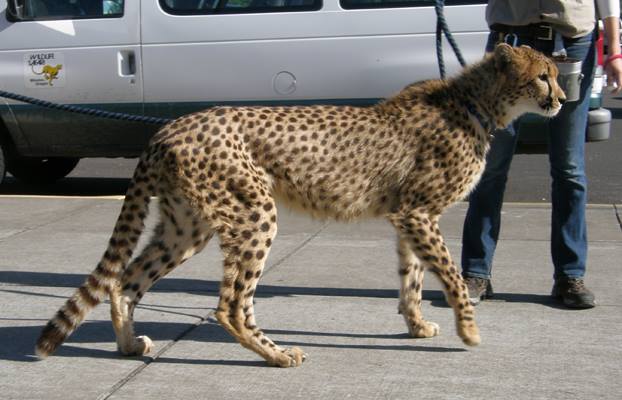 Arriving at the school.

It’s one thing to see a wild animal in a photograph, or behind a fence at a zoo or a wild animal park. It’s quite another to see that animal up close. The children at Anna’s elementary school got that chance yesterday when one of the Wildlife Safari’s ambassador cheetahs, Khayam, paid a visit.

Onstage with his keepers and a nice big bucket of steak.

The kids were mesmerized by this beautiful cat and sat in silence as one of the keepers talked at length about him and his sister Mchumba—how they were abandoned by their mother and hand-raised by staff, how they were trained to become cheetah ambassadors—and about the beautiful, endangered animals that the Safari works so hard to preserve.

He loves being in front of an audience.

At the end of the presentation, my wife Julia took the stage to encourage the kids to raise money for the Safari’s cheetah breeding program. She asked if the kids wanted to help and they all responded with an enthusiastic “yes.” The plight of the cheetah had been made real to them in part by seeing one of these animals up close. 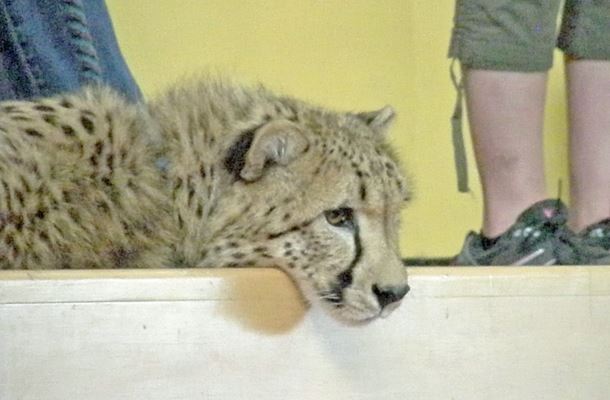 He liked seeing the kids up close too. Good thing he was full.

And now they will do their small part to make sure that someday their kids will get the same opportunity. That there will still be cheetahs for them to see up close.

4 thoughts on “Up Close”