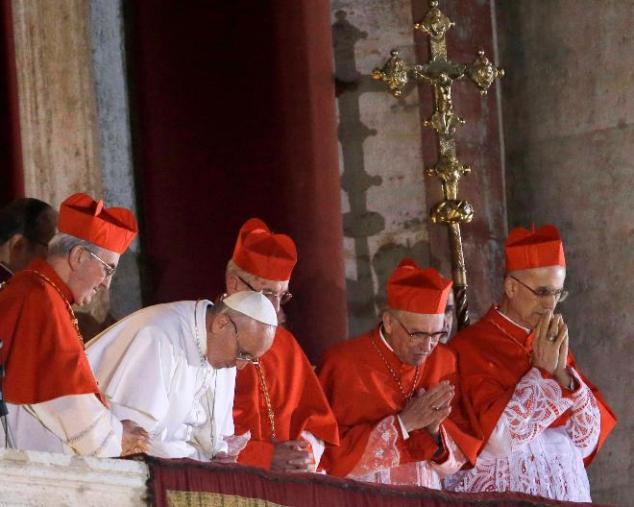 Here are five thoughts on the new pope.

1) First! The Media has taken to calling him Francis I, which is technically incorrect. While he is the first pope named Francis, the number is normally not added after a regnal name until it is duplicated. For example Queen Elizabeth I of England was simply known as Elizabeth until Elizabeth II became Queen of the United Kingdom in 1952. But the confusion is understandable. The short reigning John Paul I took an ordinal number as part of his name, and after his untimely death was followed a little over a month later by his namesake, the far better known John Paul II. In addition, we’re not used to original pope names. Before John Paul I, the last undisputed “first” was Pope Saint Nicholas I (858-67), while the last pope with a unique name was Lando (913-14). Given his short and forgettable reign it’s doubtful there will be another.

But though technically incorrect, Pope Francis is “The First” in many ways. First Jesuit pope, first “New World Pope,” and first Pope named for St. Francis (or any Francis for that matter).  However, he is not the first non-European pope. By tradition, that distinction goes to the first pope, a Galilean fisherman known to the world as St. Peter. But he is the first non-European since Pope St. Gregory III (731-41) who was Syrian.

2) His Name. Like millions of Catholics around the world, I sat staring at a set of curtains on TV for an hour waiting to find out who the new pope would be (and set a personal record for curtain-staring). Then came the announcement (and the translation):

I announce to you a great joy:
We have a Pope!
The most eminent and most reverend Lord,
Lord Jorge Cardinal of the Holy Roman Church Bergoglio,
Who takes for himself the name of Francis.

I wrote on this blog last month how Benedict XVI’s retirement was a great statement of humility. Then as the conclave began on Tuesday, I wrote in a guest post that I was praying for the next pope to follow his example. When I heard the name Francis, I felt my prayers had been answered. St. Francis is, after the Blessed Virgin, the most beloved of all saints, in large part because of his humble simplicity. All the saints are icons of Christ, but St. Francis just might be the most Christlike of them all.

3) His Simplicity. This was evident the moment Pope Francis opened his mouth. His greeting to the people gathered in St. Peter’s square and in front of televisions around the world was genuine and heartfelt. And then he led us all in prayer, saying the Our Father, the Hail Mary, and the Glory Be. These are prayers that all Catholics learn as kids—all Christians in the case of the Our Father—and in the choice of these prayers he reached out to everyone. My seven-year-old daughter was in school at the time, but if she were at home she could have prayed right along with the new pope.

4) His Humility. Then he made what was perhaps one of the most profound gestures of humility since his namesake renounced his worldly wealth. He paused before delivering his blessing and asked the people to bless him, and then he bowed his head before them. If their was ever a public gesture that showed the pope as the Servant of the Servants of God, this was it, and it was awe-inspiring.

And if that wasn’t enough, this humble man, who as Archbishop of Buenos Aires lived in a simple apartment, cooked his own meals, and rode the bus to work every day, rode the bus back to the hotel with all his brother bishops.

5) The Task Ahead. Saint Francis’ conversion was famously centered around the Chapel of San Damiano in Assisi, where, while praying before the now-famous cross that hung over the altar of that dilapidated old church, he heard Christ tell him to “repair my house which, as you can see, is falling into ruins..” Of course, Francis misunderstood—as we all often do—and fixed the chapel. But then he realized that Christ wasn’t talking about a chapel, he was talking about his House, the Church. And Francis went forth and changed the world.

Christ is calling again, saying “repair my House,” and his servant, our servant, the Servant of the Servants of God, is listening.

May Our Lord be with Pope Francis as he rebuilds and renews the Church aided by our hands, our hopes, and our prayers.

3 thoughts on “Five for Francis”