Without prayer, I’m more likely to have a bad day. To get impatient, to lose my temper, and to be more disagreeable in general. I suffer, my family suffers, and my work suffers because of it. Prayer anchors me.

So I set out with the goal of praying everyday. After one week, I was doing great. After one month, I found myself struggling with it a bit. After one hundred days, I seemed to be in a rhythm. Lent certainly helped. Then came Easter and the inevitable post-Easter letdown.

The whole thing fell apart around the beginning of May.

But, as I told myself at the beginning of the year, I knew it would be a struggle at times: that I would find myself in the spiritual desert in which the very act of prayer would become too much. I would slip, falter, and fail.

And then I would get up and keep going. 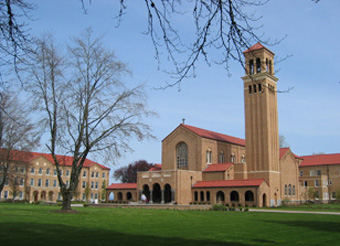 The monks of Mount Angel came to my rescue at Pentecost. I travelled to the Abbey for a weekend retreat; normally, the Retreat House would be closed over Memorial Day weekend, but the end of a seminar and a large family reunion kept the doors open and provided an opportunity for me to attend. A weekend in the rhythm of the Liturgy of the Hours brought me out of the desert and back to a spring of spiritual refreshment.

The last month I’ve gotten back on track again, not missing a single day of prayer. I know it won’t last—that I’ll stumble again at some point over the next 183 days—but I also know that when I stumble I’ll get back up again.

The one thing I won’t do is quit. And in not quitting, I will succeed.